Sadly, over Easter, we learned that Geoff had passsed, away after a short illness.

Geoff has been a member of our club for a very long time. When I joined the club some fifteen years ago, Geoff along with Bill and a few other coaches were teaching and inspiring boys and adults alike on the lake at the Mill and the Famous River Nidd. Geoff had his own way of teaching canoeing, paddling along with great skill, with a lot of humour which only encourage people to keep coming back for more canoeing.

Over the years, Geoff realised that his days paddling, were coming to an end, but that didn`t stop him coming to the Mill, always in the background, helping with the cooking and repairing anything that needed to be fixed. He was always at paddlefest setting up the slalom course, and helping with the time keeping.

I have known Geoff for a long time, but I didn’t know how he got started in this great sport of ours, so I asked Bill as they have been friends for over 40 years. This is what Bill wrote:-

I met Geoff after The 1st Cottingham BB made a plywood canoe and came to Newland Homes Pool to try it out, we named it The Bannana Boat. It sank! However some of the boys wanted to start canoeing and David, Geoffs son, was among the group that he provided transport for. Geoff got the bug and so became part of The Hull BBCC. A short while later, Philip, Geoffs younger son, became a big part of Geoffs motivation to keep up all the river trips to all over Yorkshire and beyond. In 1984  Geoff transported some of the boys to Crystal Palace to The International Canoe Exhibition, this was the start of BBCC display stands, which led to many nights in church halls around London.

Our calender for the year was, February, Canoe Exhibition. March was the river clean on The Nidd, Training weekend in April at The Mill, the National Championships around the country in May, followed by the summer river trips with our boys onto the sea with Big Bertha, as the safety boat.

After many years on a Thursday at Newland Homes Pool, we moved to Beverly Pool on a Saturday, running two one hour sessions. The first for none BB Boys and Girls along with Mums and Dads, and the second session for BBCC boys, who we taught to paddle upto the two star award.

On behalf of the Boys Brigade Canoe Club, and all of its members may I send our deepest sympathy to Geoff’s family, our hearts and prayers go out to all who knew Geoff. He inspired many, and we will always have happy memories to remember him by. 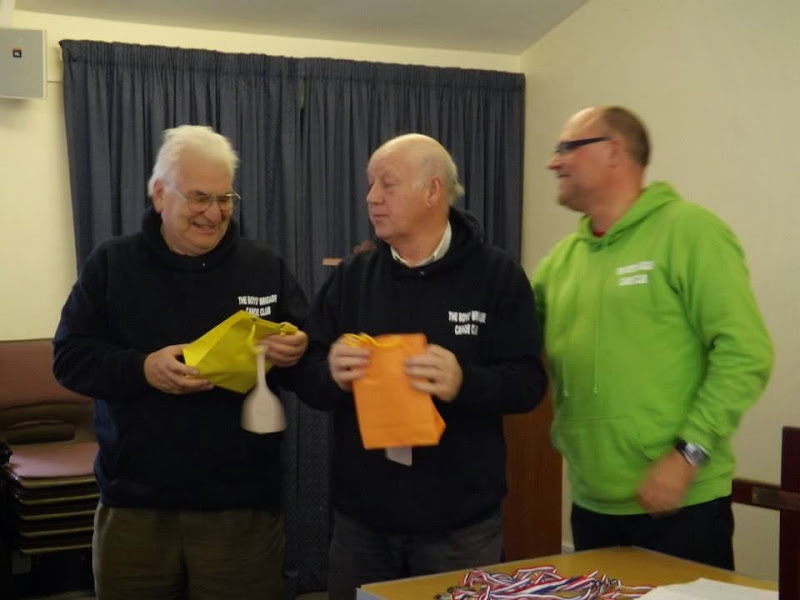 Geoff, Bill & Neville during the awards ceremony at Paddlefest 2013 on the River Wye.

Comments are closed, but trackbacks and pingbacks are open.